When Sony entered the console market many were skeptical.  If you were around during their publishing days you’ll remember a slew or terrible licensed titles such as the Last Action Hero and Cliffhanger.  Sure every now and again they published a gem like Sky Blazer and Hook but they were the exception but not the rule.  But their secret ace in the hole would be Psygnosis, a long standing European developer who would use the move to 3d to reinvent themselves.  Psygnosis created some of the best titles in the early years of the PS One but one title stood out in particular.  Wipeout was unlike almost anything we had seen before and one of the lead titles in the futuristic racing genre.

One could say the genre was ripe for the taking.  F-Zero was innovative but was still only one title released four years prior.  The few other titles in the genre such as Crash & Burn and Rock n Roll Racing did not leave their mark.  Wipeout, with its stellar graphic design and courses, became one of the premier titles for the PlayStation early on.  That being said it does have some growing pains that hold it back from being truly great. 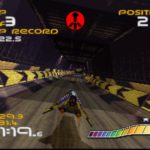 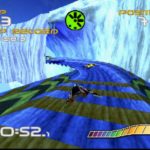 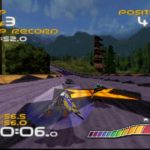 The most striking aspect of Wipeout is its graphic design.  Psygnosis hired the Designer’s Republic to give the game its visual identity and they did so splendidly. Everything from team logos, the packaging, and menus are visually striking, incredibly slick and distinct.  It also helps hide some of the game’s graphical deficiencies.  For its time Wipeout was a striking game.  The art direction is still superb as well as the track design.  But the massive draw-in is blatantly obvious, with half the tracks assembling in front of you at times.  The brilliant techno soundtrack makes up for the weak sound effects as well.  This was very much a game of compromises.

Wipeout’s anti-gravity league has of four teams, each with two pilots.  Each ship differs in terms of top speed, weight, acceleration, and turning although these aren’t visible to players.  Although this is a future racing game it takes a lot of cues from Super Mario Kart.  There are speed boosts and weapons along the track although there integration isn’t that great.  It also uses the same points system after each race.  First to fifth place out of eight competitors receive points.  However you must place in the top three in order to progress in the Championship league.  It’s a harsh requirement, especially as the game is very difficult.

Since you are piloting hovercraft their controls are a little different.  All vehicles glide on a cushion of air and are subject to gravity.  Ascending a hill without titling upward will result in a loss of speed.  Conversely leaning into hills will help build momentum.  Depending on the team and pilot your turn radius will differ wildly.  Team Qirex have the greatest acceleration but the worst handling while FEISAR are great for beginners.  The air brakes help somewhat but take some time to adjust to.  Because of the wild track design you’ll have to master these nuances relatively quickly as Wipeout doesn’t play.

As much as I enjoy Wipeout its aggressive physics model nearly ruins it.  Wipeout was a near launch title and so doesn’t have the luxury of analog control to ease you into its control.  This isn’t the type of game where the standard racing tactic of power sliding or lightly tapping accelerate will work.  Crashing into walls will cause a dead stop in almost every case which is harsh.  I’ve already mentioned the turn cycle of each team but that is only half the battle.  You need to apply the air brakes before entering a turn which takes nuance to master.  The physics are the worst part of the game and were bad then and are worse now.

Due to the physics and controls Wipeout is one of the most difficult racing games around.  The game has little margin for error as crashing saps all speed and it takes time to get back up.  You have two tracks minimum before the game throws you in the deep end.  Tracks like Korodera and Arridos IV feature many twisting turns and steep drops and appear early in the Championship mode.  It will take until lap three to even see first place.  And that is if you run a near perfect race.  It seems the designers were aware of the game’s high difficulty as you can play any track in a single race or time trial.  You’ll need the practice as the later tracks are absolutely brutal.  This is one of the few racing games I gave up on, not because of lack of skill but because it felt unfair.  Beware.

Wipeout was one of the most advanced racing games on the market this side of the arcade in 1995.  Wipeout’s graphical flair isn’t backed up with matching gameplay but it is still solid.  However its promise is realized by its far superior sequels.

The Adventures of Little Ralph