Hammerin’ Harry is an odd series. It is very similar to Konami’s Goemon series in that focuses on one specific period in the country’s history, in this case the swinging 80s. Despite their absurd take on Japanese society that flavor was retained when they were brought overseas. That wasn’t always a recipe for success; Konami would wait until the SNES to try Goemon in the states. But Irem were more adventurous, at least in the arcade. But Hammerin’ Harry probably wasn’t successful, as the NES version missed US shores. It did hit Europe however, but its not like you need a localization to enjoy this solid little romp.

Despite its Japanese origin Hammerin’ Harry’s story working class man is universal. One day the Rusty Nail Corporation tears down Harry’s home. Not because they want the land. Not because he wouldn’t pay his protection money. No, because fuck you, that’s why. What’s a man to do? Grab a big ass hammer to get some justice, that’s what. Next to R-Type Hammerin’ Harry is Irem’s longest running series. While it starts out grounded it goes to some weird places later, which is probably why it has been Japan exclusive since. This first entry is a port of the arcade game and a late release in Europe; 1992 when support had all but dried up. Its an odd choice for a late release but any quality game is worth it regardless of the year, of which this qualifies.

Hammerin’ Harry on the NES is not an exact arcade port. Irem has moved some stages around and outright removed others. In their place are new levels, making this a unique take on the arcade game for those already familiar with it. There have been some slight gameplay tweaks but for the better. Honestly, I’m surprised this did not come to the US; the NES was not as popular in Europe yet Hammerin’ Harry was released there with some of the ghastliest box art known to man. 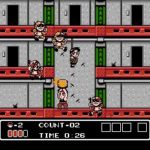 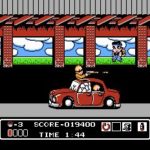 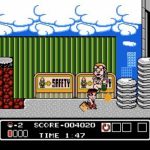 Hammerin’ Harry is the working man’s hero and is pretty bad ass for a construction worker. Your hammer is big and has a large hit box. You can pound the ground to stun enemies and also hold it aloft to use as a shield. The one element from the arcade that didn’t carry over is the ability to smack boxes around. As a result there are fewer boxes laying about but they do carry all important power-ups.

There are only a few power-ups but they are way too strong. POW icons give Harry a comically huge hammer. Seriously, it is almost bigger than he is. Chili peppers grant a 360-degree hammer swing that is game breaking. Hard Hats absorb one hit, which in the arcade was necessary. This version of the game gives you a life bar, making the hard hat less important. There is also a medicine bottle that restores one bar of health.

Despite having a few items they make this version of Hammerin’ Harry a cakewalk. The single hit deaths in the arcade made you extremely cautious and gave the game a different pace. The home port is faster.  The problem is it still uses the same enemy placement and such as the arcade game, creating a gross imbalance. With a chili pepper you no longer need to time your attacks as they will always hit no matter what. The giant hammer is rare but even worse at trivializing the game. The one area that could have added some challenge, the boss battles, are so brain dead simple they might as well have not been included.

The game’s easy difficulty makes its short length that much worse. There are only five levels in the NES version, down one from the arcade. That one extra level would have gone a long way toward making this a more well-rounded experience. Two of the stages are completely original but come at the expense of two of the arcades. If those levels had been included this would have been the perfect length. They also could have trimmed all those bonus stages to include more content. The game is already easy as is, the bonus stages only make it that much easier.

The trip to beating up the RNC is short but you’ll enjoy every minute. Hammerin’ Harry is a solid platformer bordering on greatness. It isn’t common but it also isn’t expensive and is a good 2nd tier purchase.

Star Wars – the Empire Strikes Back

Conan: the Mysteries of Time

Disney Adventures in the Magic Kingdom