I’ve always been fascinated by the idea of pinball more than the reality of playing it.  Growing up pinball tables were everywhere, featuring any license you could think of.  Every so often I would dump a quarter into an Addams Family or Robocop machine thinking this would be the one but never found them engaging.  Yet the Crush series of pinball games hooked me like no other.  Alien Crush may have caught my attention but Devil’s Crush/Dragon’s Fury is what made me grow an appreciation for the genre.

Dragon’s Fury is the Sega port of the Turbo Grafx-16 game Devil’s Crush.  Why they didn’t start from the beginning with Alien Crush we will never know.  Oddly enough Technosoft did the honors and there are some slight and major differences.  For the most part the main table is the same.  The Genesis’ higher resolution is used to display a UI to the right of the screen.  The system’s lower color palette has resulted in a brighter look and loss of detail that doesn’t gel with the dark fantasy theme.  There is also some light censorship that is negligible.  The soundtrack has been overhauled; they are the same songs but the arrangements are different.  It comes down to personal preference as to which is better. 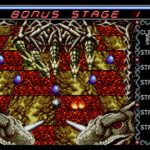 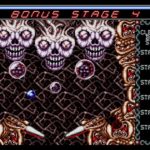 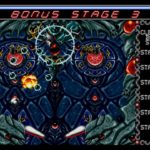 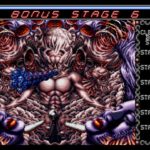 The biggest change comes in the game’s bonus rounds.  Previously these were simply areas where you could score a huge chunk of points.  Now these serve as a means of finishing the game.  In Devil Crush you had to reach the max score of 999,999,990 to actually beat the game.  That was a tall order even with the generous scoring. Each of the game’s six bonus rounds features gorgeous art and is a visual treat.  Completing all six will open the way to an all new lengthy final boss battle.  It gives the game a quest like structure for those that want it while also allowing those that just want to play a cool game of pinball to do so.  If only the ending were worth it.

Unlike most pinball games Dragon’s Fury uses a table three screens high.  It gets around the uncontrollable nature of such a setup by including a set of flippers for each screen.  The table is three screens but it is more like two; it is near impossible to consistently reach the top of the board.  The game makes excellent use of its dark theme y decking out the table with all manner of demons and such.  It is incredibly fun just to hit random parts of the table to see what happens.  To obtain the most points you will have to enter the bonus stages.

The six bonus stages are where you will rack up the most points.  The only problem is reaching them.  There are two methods of doing so.  Specific points on the map will warp you to a random bonus stage.  These are the “easiest” to hit but if you want a certain level, tough luck.  Then there are set steps that will grant access to specific bonus stage.  These vary.  Some are as simple as hitting the dragon in the middle of the table ten times.  Others are more complex, like making the roulette at the top of the table stop at a specific point.  It’s a task in itself to even reach the top of the table, let alone do that.  But if you put in the work you can not only milk each stage for points but are also treated to cool boss battles not common in pinball.

Dragon’s Fury is a difficult game but that applies to any pinball game.  Even though you can set the ball speed to fast or slow the random nature of the game’s physics means you will spend a lot time watching the game play itself.  You can try to aim for specific areas but there is little guarantee you will make it.  It is soul crushing to end an extremely good run due to chance but that is the nature of pinball.  Some of the bonus rounds are harder than others (number 5 in particular) but all are still fun.  Passwords do help but you will still have to work to “beat” this one.

Dragon’s Fury has a high challenge yet is still an awesome game of pinball. It satisfies on two fronts, enabling those who like to play for high scores to do so while also giving adventure fans an end game objective.  Whatever your preference Dragon’s Fury won’t disappoint.

Spider-Man and the X-Men in Arcade’s Revenge

Developer: Hot-B    Publisher: Sage's Creation     Released: 1990    Genre: Shooter For as much as we craved arcade perfection back...